Back in March 2003, Nick Finck and Steven Champeon stunned the web design world with the concept of progressive enhancement:

Rather than hoping for graceful degradation, [progressive enhancement] builds documents for the least capable or differently capable devices first, then moves on to enhance those documents with separate logic for presentation, in ways that don't place an undue burden on baseline devices but which allow a richer experience for those users with modern graphical browser software.

Sometimes we agree to disagree 🔗

Feature support for core JavaScript language features by major browsers is great. Kangax' ECMAScript 2016+ compatibility table is almost all green, and browser vendors generally agree and are quick to implement. In contrast, there is less agreement on what we colloquially call Fugu 🐡 features. In Project Fugu, our objective is the following:

Enable web apps to do anything native apps can, by exposing the capabilities of native platforms to the web platform, while maintaining user security, privacy, trust, and other core tenets of the web.

You can see all the capabilities we want to tackle in the context of the project by having a look at our Fugu API tracker. I have also written about Project Fugu at W3C TPAC 2019.

To get an impression of the debate around these features when it comes to the different browser vendors, I recommend reading the discussions around the request for a WebKit position on Web NFC or the request for a Mozilla position on screen Wake Lock (both discussions contain links to the particular specs in question). In some cases, the result of these positioning threads might be a "we agree to disagree". And that's fine.

As a result of this disagreement, some Fugu features will probably never be implemented by all browser vendors. But what does this mean for developers? Now and then, in 2003 just like in 2020, feature detection plays a central role. Before using a potentially future new browser capability like, say, the Native File System API, developers need to feature-detect the presence of the API. For the Native File System API, it might look like this:

In the worst case, there is no legacy approach (the else branch in the code snippet above). Some Fugu features are so groundbreakingly new that there simply is no replacement. The Contact Picker API (that allows users to select contacts from their device's native contact manager) is such an example.

But in other cases, like with the Native File System API, developers can fall back to <a download> for saving and <input type="file"> for opening files. The experience will not be the same (while you can open a file, you cannot write back to it; you will always create a new file that will land in your Downloads folder), but it is the next best thing.

A suboptimal way to deal with this situation would be to force users to load both code paths, the legacy approach and the new approach. Luckily, dynamic import() makes differential loading feasible and—as a stage 4 of the TC39 process feature—has great browser support.

I have been exploring this pattern of progressively enhancing a web application with Fugu features. The other day, I came across an interesting project by Christopher Chedeau, who also goes by @Vjeux on most places on the Internet. Christopher blogged about a new app of his, Excalidraw, and how the project "exploded" (in a positive sense). Made curious from the blog post, I played with the app myself and immediately thought that it could profit from the Native File System API. I opened an initial Pull Request that was quickly merged and that implements the fallback scenario mentioned above, but I was not really happy with the code duplication I had introduced. 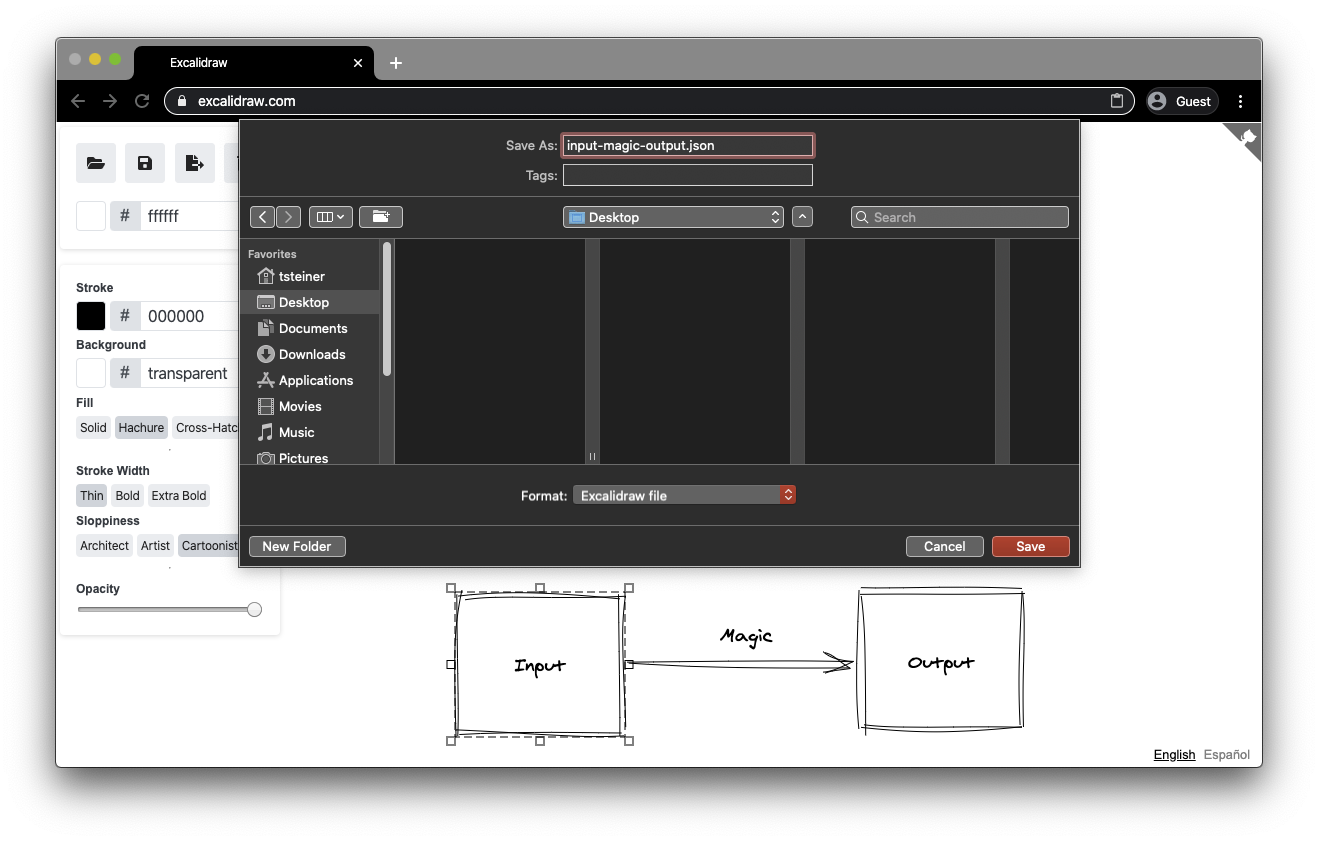 As the logical next step, I created an experimental library that supports the differential loading pattern via dynamic import(). Introducing browser-nativefs, an abstraction layer that exposes two functions, fileOpen() and fileSave(), which under the hood either use the Native File System API or the <a download> and <input type="file"> legacy approach. A Pull Request based on this library is now merged into Excalidraw, and so far it seems to work fine (only the dynamic import() breaks CodeSandbox, likely a known issue). You can see the core API of the library below.

Polyfill or ponyfill or abstraction 🔗

Triggered by this project, I provided some feedback on the Native File System specification:

There are several other open issues for the API, and its shape is not stable yet. Some of the API's concepts like FileSystemHandle only make sense when used with the actual API, but not with a legacy fallback, so polyfilling or ponyfilling (as pointed out by my colleague Jeff Posnick) is—in my humble opinion—less of an option, at least for the moment.

My current thinking goes more in the direction of positioning this library as an abstraction like jQuery's $.ajax() or Axios' axios.get(), which a significant amount of developers still prefer even over newer APIs like fetch(). In a similar vein, Node.js offers a function fsPromises.readFile() that—apart from a FileHandle—also just takes a filename path string, that is, it acts as an optional shortcut to fsPromises.open(), which returns a FileHandle that one can then use with filehandle.readFile() that finally returns a Buffer or a string, just like fsPromises.readFile().

Thus, should the Native File System API then just have a window.readFile() method? Maybe. But more recently the trend seems to be to rather expose generic tools like AbortController that can be used to cancel many things, including fetch() rather than more specific mechanisms. When the lower-level primitives are there, developers can build abstractions on top, and optionally never expose the primitives, just like the fileOpen() and fileSave() methods in browser-nativefs that one can (but never has to) perfectly use without ever touching a FileSystemHandle.

Progressive enhancement in the age of Fugu APIs in my opinion is more alive than ever. I have shown the concept at the example of the Native File System API, but there are several other new API proposals where this idea (which by no means I claim as new) could be applied. For instance, the Shape Detection API can fall back to JavaScript or Web Assembly libraries, as shown in the Perception Toolkit. Another example is the (screen) Wake Lock API that can fall back to playing an invisible video, which is the way NoSleep.js implements it. As I wrote above, the experience probably will not be the same, but the next best thing. If you want, give browser-nativefs a try.