The other day, I did an analysis of Facebook's WebView, which you are kindly invited to read. They have a code path in which they check whether a given page is using AMPHTML, where \u26A1 is the Unicode code point escape of the ⚡ High Voltage emoji.

I was curious to see if they did something special when they detect a page is using AMP (spoiler alert: they do not), so I quickly hacked together a fake AMP page that seemingly fulfilled their simple test.

I am a big emoji fan, so instead of the <html amp> variant, I went for the <html ⚡> variant and entered the ⚡ via the macOS emoji picker. To my surprise, Facebook logged "FBNavAmpDetect: false". Huh 🤷‍♂️?

My first reaction was: <html ⚡️> does not quite look like what the founders of HTML had in mind, so maybe hasAttribute() is specified to return false when an attribute name is invalid. But what even is a valid attribute name? I consulted the HTML spec where it says (emphasis mine):

I was on company chat with Jake Archibald at that moment, so I confirmed my reading of the spec that ⚡ is not a valid attribute name. Turns out, it is a valid name, but the spec is formulated in an ambiguous way, so Jake filed "HTML syntax" attribute names. And my lead to a rational explanation was gone. 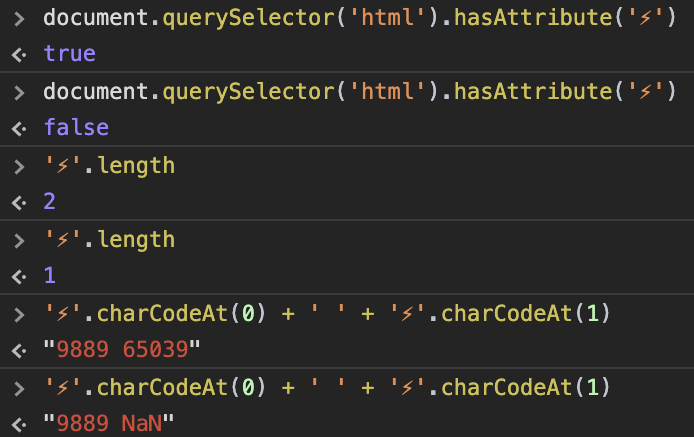 Jake eventually traced it down to the Unicode Variation Selector-16:

You may have seen this in effect with the Unicode snowman that appears in a textual ☃︎ as well as in an emoji representation ☃️ (depending on the device you read this on, they may both look the same). As far as I can tell, Chrome DevTools prefers to always render the textual variant, as you can see in the screenshot above. But with the help of the length() and the charCodeAt() functions, the difference gets visible.

The AMP Validator and ⚡️ 🔗

The macOS emoji picker creates the variant ⚡️, which includes the Variation Selector-16, but AMP requires the variant without, which I have also confirmed in the validator code. You can see in the screenshot below how the AMP Validator rejects one of the two High Voltage symbols.

I have filed crbug.com/1033453 against the Chrome DevTools asking for rendering the characters differently, depending on whether the Variation Selector-16 is present or not. Further, I have opened a feature request on the AMP Project repo demanding that AMP should respect ⚡️ apart from ⚡. Same same, but different.