I started to blog way back in 2005, and while I was skeptical whether it would work out and was worth my time, I just tried it and danced 💃 and wrote like no one was watching (which definitely was the case for a while). Many of these early posts are slightly embarrassing from today's point of view, but nevertheless I decided to keep them around, since they are a part of me. Remember, this was before social networks became a thing. Actually, social networks almost killed my blogging, in both 2016 and 2017 respectively I only wrote one post, but plenty of tweets and Facebook posts. Here's a screenshot of the old blog: 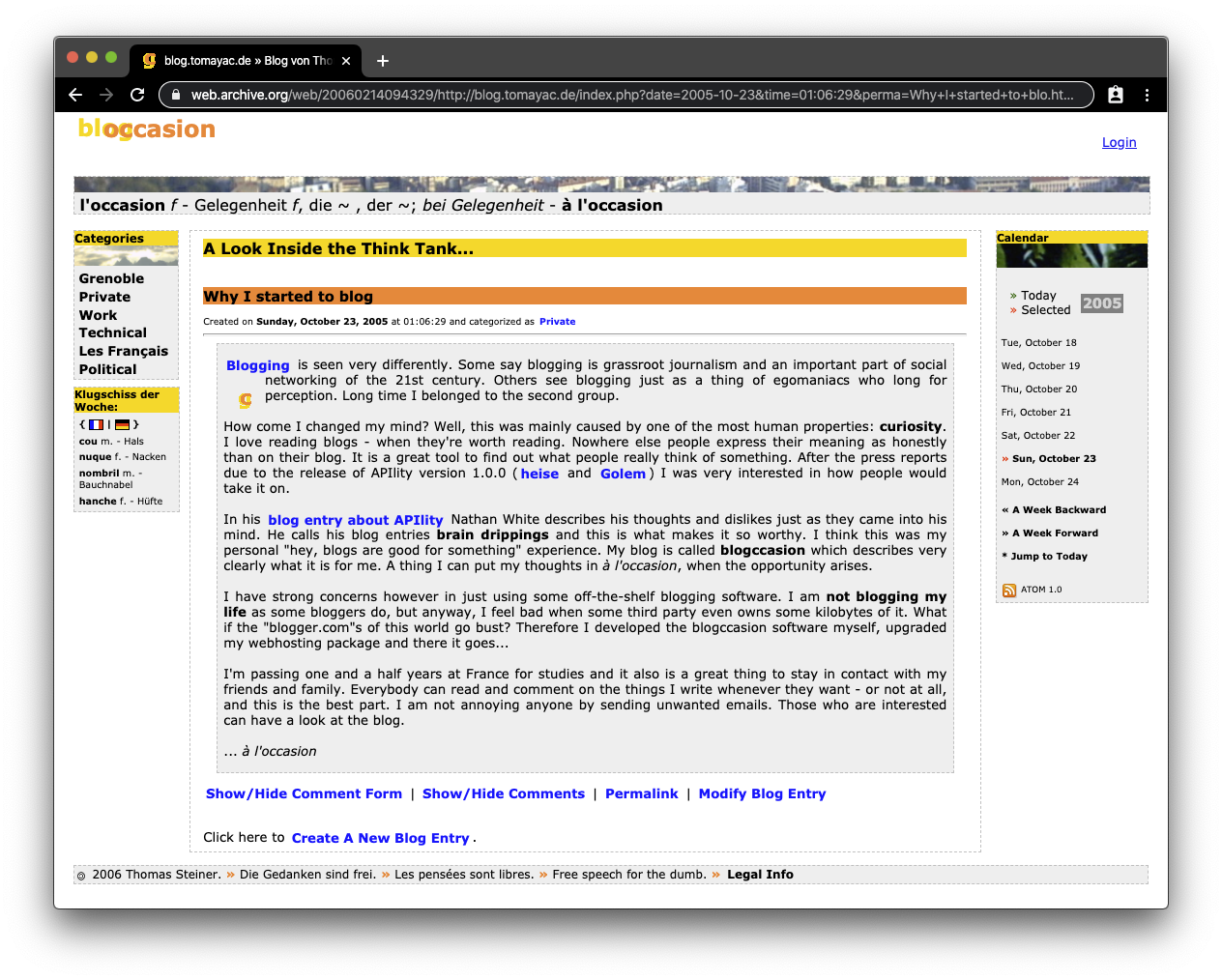 One of the reasons why I blogged less was also my hand-rolled stack that the blog was built upon: A classic LAMP stack, consisting of Linux, Apache, MySQL, and handwritten PHP 5. Since I had (and still have) no clue of MySQL character encoding configuration, I couldn't store emoji 🤔 in my database, but hey ¯\_(ツ)_/¯. The switch to HTTPS then killed my login system (that before on HTTP anyone could have sniffed, did I mention I was clueless?). In the end I had to log into phpMyAdmin to enter a new blog post into the database by hand. It was clearly time for a change.

Luckily this was the time when static site builders became more and more popular. I had heard good things of Zach Leatherman's Eleventy, so I went for it. It was super helpful to have the eleventy-base-blog repository that shows how to get started with Eleventy. I took extra care to make sure all my old URLs still worked, and learned more than I wanted about .htaccess files and .htaccess rewrite maps, since we all know that cool URIs don't change. There I was with a modern stack, and a 2005 design.

Now, I've finally also updated the design, and, while I'm not a designer, I still quite like it. Obviously it supports prefers-color-scheme, aka. Dark Mode and also uses the <dark-mode-toggle> custom element, but I've also decided to go for a responsive "holy grail" layout that is based on CSS Grid.

Here're the resources that helped me build the new Blogccasion:

🙏 Thanks everyone for letting me stand on your shoulders!

There're still some rough edges, so if you encounter a problem, please report an issue. It's well-known that there're a lot of encoding errors in the older posts. At some point I broke my database in an attempt to convert it to UTF-8 🤦‍♂️… If you care, you can also propose an edit straightaway, the edit this page on GitHub link is 👇 at the bottom of each post. Thanks, and welcome to the new Blogccasion.